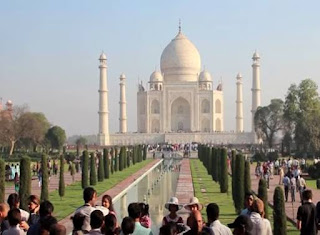 Located at the Yamuna River in Agra, the Taj Mahal is a Mughal architecture, and also one of the Seven Wonders of the World. Built in 1653, it is a sign of love that wrote history, and is also known as the ‘Crown of the Palace’, as the name suggests. Being one of the most looked-after monuments in the world, the tourists are really attracted to the history of this place. People are very keen on knowing the history of Taj Mahal, and what made the Mughal Emperor Shah Jahan build a tomb for his wife Mumtaz.

The history of Taj Mahal is something that attracts a lot of tourists to this place. It is the history of this place that adds a majestic touch to it, a touch that is filled with love. The Mughal Emperor Shah Jahan got this built for his wife Mumtaz who passed away after giving birth to their 14th child. This was a tribute to her, and was built in the memory of their love. That is the reason Taj Mahal is referred to as the symbol of love.

As it was built under the guidance of a Mughal Emperor, the Taj Mahal attains Mughal architecture, and the tourists find it very fascinating. The time when the Taj Mahal was built, people preferred building up monuments with red stone. But Shah Jahan made sure his symbol of love was different from others, and eventually went on a unique path. He got it built with white marbles, which were inlaid with semi-precious stones.

Taj Mahal is one of the most iconic monuments, and people all across the globe make sure they visit the Taj Mahal whenever they are in the country. It not only represents Agra in the country, but it also represents the entire country worldwide. Being one of the Seven Wonders of the World, there are a few reasons why a person must visit the Taj Mahal at least once. Those reasons are:

–          The beautiful and majestic architecture

The Taj Mahal attracts a lot of tourists from not only the country, but from all over the world. This symbol of love is so strong, that people want to make a visit to it at least once, and see as to how a man loved his wife so much that he built an entire monument in the memory of her. There is a footfall about 7 million to 8 million visitors annually, and this helps a lot in maintaining the economy of the area. The tourists prefer visiting the Taj Mahal between October to February, as that is the most ideal time to do so. It is pleasant, and they can go around the place with the weather in their favour.

o   It took 17 years for the workers to complete the Taj Mahal.

o   This monument represents India worldwide, and attracts millions of tourists towards it.

o   There were a total of 1,000 Elephants involved for the transportation of goods and services from one place to another, while building the Taj Mahal.

o   The fingers of the labourers involved in making the monument were chopped off as a command of the Emperor, so that they could not make anything like this ever again.

o   The Emperor had planned to build another Taj Mahal right across the Yamuna River, but in black colour. This couldn’t be done, as he had a war with his sons who eventually interrupted the entire plan.