Ever since the Prime Minister Narendra Modi unveiled the Statue of Unity in Narmada district, Gujarat, the opponents and critics have been raising one question:

To critics like Anjani Trivedi, a Bloomberg Opinion columnist, it’s 25,000 tons of steel, 3,550 tons of bronze and 210,000 cubic meters of cement and concrete — towering over the world at a cost of about $400 million in India. Such critics view strongman showmanship as the likeness of Sardar Vallabhbhai Patel, a leader of the independence movement known as the “Ironman of India,” who died in 1950. 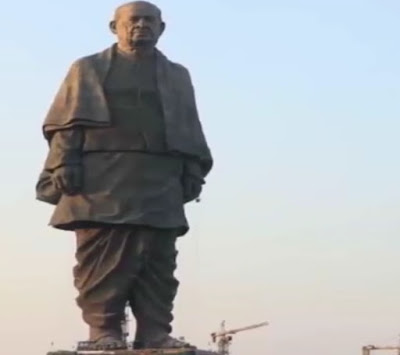 At 182 meters (597 feet), it’s the tallest such structure in the world — double the height of the Statue of Liberty and more than 40 per cent higher than China’s Spring Temple Buddha.
Naysayers. They regard this display of nationalism as ostentatious which comes at the expense of other priorities.  And they try to figure out all the things the statue didn’t do. For them, it’s symbolic of the Modi government’s ability to push through spending on populist causes – even those that displace villages, sugarcane mills and farmers — while more urgent needs go unaddressed.

– The cost $400 million could have been spent elsewhere. This is:
= around 90% of the central government’s annual budget for the skill development and entrepreneurship ministry;
or
= around 90% of the development expenditure budget for roads and bridges
or
= the amount required to irrigate 40,000 hectares of land
or
= the biotech department’s planned spending
or
= double that of the ministry of shipping
– All that cement and concrete could have been used to pave decrepit roads that cause thousands of deaths every year.
– The amount $400 million was mobilised through state-backed companies – gas giant GAIL India Ltd. and Oil India Ltd –  through their corporate social responsibility departments to support the project each putting in about $3.4 million. 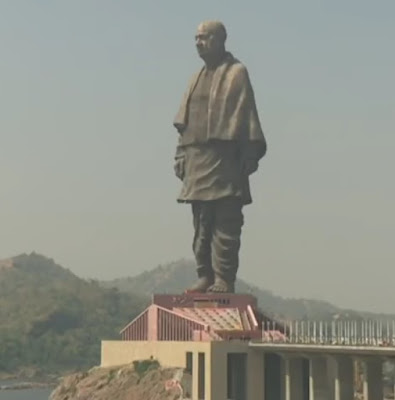 – The efficiency of the government machinery stands in stark contrast to India’s modus operandi when it comes to infrastructure. Larsen & Toubro Ltd., India’s largest construction company, took less than three years to erect the statue. By comparison, China needed 11 years to construct its Buddha.
Also Read: Statue of Liberty

Facts of the matter.

Brand Value. In Business jargon, this is one factor which not only brings in the initial investment, but it also sustains working capital and above all credibility. The Statue of Unity symbolises just that. The region in particular and the whole Nation, in general, may now attract more investments and command more respect. The magnitude and scale can only be fathomed by the first day first show performance.
Critics sound like the proverbial story of sour grapes being retold. The opposition opposes only for the sake of opposing.  They will oppose anything being done by the ruling party, and try to find fault lines. That’s why they are in the opposition. After all, there will always be naysayers who will say it should not have been done.
In the case of the Statue of Unity, it is not just the amount $400 million, 25,000 tons of steel, 3,550 tons of bronze and 210,000 cubic meters of cement and concrete that is visible in a strongman showmanship towering over rest of the world. It is much more than that. It also includes technical acumen, an artist’s vision, and a powerful political will which together make the end result a priceless work of art and an engineering marvel.
If someone gives you $800 million, then can you create even 10% of this strongman showmanship?

The entire set of people working there today is from the region itself which were earlier very poor. People whose lands were acquired for the project have already been given alternative lands and pucca houses. The business at the complex is run by local residents and more attractions will be added as the complex will grow in stature. There are young boys and girls in grey uniforms and work as “guides”. They are from the very poor, farmer and tribal families. A glimpse of it has been shown to the world on TV on the of the inauguration.
For the entire project, training centres have been set up to skill these people according to their interest and ability. The guides get 25K if they can speak only Gujarati, 35K if they can speak Hindi and 45K if they can also speak English. This is a Central government run place so they get sarkari jobs. Officers are constantly on the move identifying and training these folks for the different kinds of jobs. They are extremely happy with this project as it has transformed their lives, love Modi and do not stop singing his praises.
“This monument will not just be a mute memorial like the rest, but a fully functional, purpose-serving tribute,’’ the Statue of Unity’s website says, promising it will spur all sorts of socioeconomic development.

Its a huge achievement. Not only India’s infrastructure, but every sector of the economy, every office of the bureaucracy can draw inspiration from this ironclad resolve to attain any goal.
That is indeed optimistic. Even though the cost of an entrance ticket is as much as that of daily earning of an unskilled worker in Delhi, it symbolises a towering feeling of self-respect. That worker may not visit the place in his life time, but, who knows, a much bigger monument than this can be erected for him. In other words, in the next 70 years or so, one or more monuments like this will be made. Some other place, some other legend. That legend today could be the one of the thousands of those so-called unskilled workers sweating in the lanes and by-lanes of Delhi !

Economy yet to feature in election debates: CPD