Srikalahasteeswara Swami temple, located on the banks of the river Swarnamukhi, is an ancient Shiva temple in Srikalahasti Town of Chitoor district in Andhra Pradesh. It is also known as ‘Dakshina Kailasam’ (The abode of Lord Shiva in the South). Om Namah Shivaya.
Nearest city/airport: Tirupati 35 km
Nearest railway station: Srikalahasti – well connected with Bangluru, Chennai, Secunderabad, etc.
Best Season To Visit : All
Languages : Telugu & English
Temple Timings : 6:00 AM to 9:00 PM
Photography : Not Allowed inside temple premises
The place – Srikalahasteeswara Swami temple – is easily accessible today, the nearest railway line is 3 km and the Tirupati airport is 32 km away. A number of small and big hotels to suit every budget are available.
This is an old temple of Lord Shiva built around 12th century, famous for vayu linga, one of the Panchabhoota Sthalams, representing the wind. Lord Shiva in his aspect as Vayu is worshiped as Kalahasteeswara.
The temple appears magnificent with its interior of old times: sculptures, carvings, huge premises, pillars, etc.

Crowds are usually more during festive times, but otherwise its not a big problem. Managing a sea of devotees every day is indeed a mammoth task. We must thank the temple management, and the workers for this. Darshan tickets are available from Rs 20 onwards from one counter and the prasad can be collected from another counter. 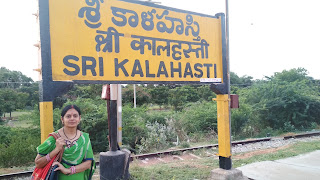 The Srikalahasteeswara Swami temple is also believed to be associated with Rahu and Kethu, two of the nine celestial bodies in Indian astrology. People mostly visit here to perform the Kala Sarpa  pooja. The temple routinely conducts Rahu-Kethu Sarpa Dosha Nivarana Pujas, a ritual for which it attracts its thousands of devotees like me from all over the world. It assumes more significance during the holy month of Sravan. There are separate ticket counters for purchasing ‘Dosha Puja’ tickets. As costly as Rs 5000/-.
Without this, it is very difficult to perform the puja. You get a bag containing puja items as two types of silver snakes, bitter leaf, two lemons, two types of grains and kumkum with turmeric, along with two pieces of cloth- black and red.
The priest conducts the puja, in batches of 50 or so devotees, explains the rituals and speak in Tamil, Telugu, English & Hindi. The lady servitors assist you properly. 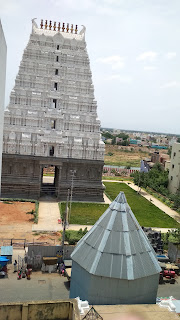 For a ‘Darshan’ of the Lord Shiva, you spend an hour or more in the serpentine queue of devotees like you. You feel divine when your destiny does give you those precious few seconds in front of the Lord. Srikalahasti temple is simply a great temple. An unusually high sense of positive energy inside its premises. The aura is there to be felt and believed. One wonders how the Chola and Vijayanagara kings managed to build such an epitome of architecture and worship.
During the darshan, I could not hold my tears. Even today, I don’t know why I cried. It was a rare emotion, something unique that I can’t express in words. Something mysterious. My wife and I say let it stay as it is!
Follow the queue, the crowd will automatically lead you to the exit.

Hyderabad: The Evolution to Cyberabad