Clearing the deck for the construction of an international Greenfield airport in Jewar, a delegation of farmers from the Greater Noida and adjoining areas met Chief Minister Yogi Adityanath at his official residence here and handed him agreement letters stating that that a majority of the farmers were ready to allow government to a acquire land after being paid the required compensation.
This allows the government to go ahead with the acquisition of the land for construction of airport. 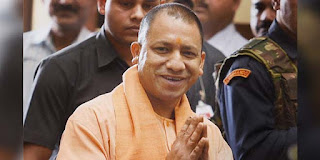 Chief Minister Yogi Adityanath told the delegation that the farmers have always played a key role in the development of the state and their contribution in the construction of an international Greenfield airport at Jewar will be written in golden letters.
“On the part of the government we will ensure that farmers get the compensation as agreed and in case there is rehabilitation, the farmers will also get the rehabilitation package,” the CM said.
This delegation of farmers was led by ruling party MP from Jewar Dhirendra Singh Rohi. This meeting will be a big boost for the government as a section of farmers had staged protest saying they will not give land to the government for construction of Jewar airport because they were not getting compensation. The opposition parties had tried to make it a big issue saying government was not serious in construction of airport there.
The protests had started after the DPR and Techno-Economics Feasibility Report (TEFR) of this project were prepared. The said report was prepared by Price Water House Consultant Company. As per this report 1441 hectare of land spread over in eight villages will be acquired. The proposed airport will be built at PPP model at a cost of Rs 15754 crore.
The Government has already earmarked Rs 130 crore for land acquisition. The proposed airport will have two run ways and will have a capacity to handle 70 million passengers annually. The airport, 72 km away from IGIA Airport in Delhi, is expected to give a major boost to tourism at Mathura, Vrindavan and Agra.
Chairman Yamuna Expressway Industrial Development Authority Dr Prabhat Kumar and Principal Secretary to Chief Minister SP Goyal were present on this occasion. In 2017, Yamuna Expressway Industrial Development Authority has notified 3,000 hectares of land for a world-class industrial airport.