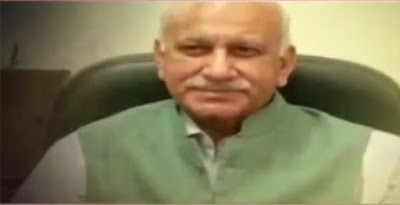 It started with #MeToo revelations on October 8 by journalist Priya Ramani following which over ten other women also levelled sexual harassment allegations against him. (See: Akbar)
In response, Akbar quit his Minister of State (External Affairs) post and filed a criminal defamation case against Ramani, stating that her alleged “defamatory articles” on him were a “figment of imagination” and “only” intended to “malign” his reputation.  However, Akbar filed the criminal defamation complaint only against Ramani.
The complaint had listed six witnesses: Joyeeta Basu, Editor; Veenu Sandal; Syed Habibur Rehman; Tapan Chaki; Sunil Gujral; and, Manzar Ali. Attached to the complaint were a list of documents comprising an article published in Vogue India, copies of “defamatory imputations” made on Twitter, and articles that appeared in newspapers and online news portals.
Journalist Joyeeta Basu today gave her statement in the case that was recorded in Delhi’s Patiala Court:
– I’ve always held him in high regard. He has been professional in his dealings with me. He has always been a tough taskmaster, thoroughly professional and a brilliant teacher.
Speaking in defense of Akbar, Joyeeta had earlier said: Akbar had been “one of the best bosses”, and that she had “never felt uncomfortable” with him. “Since so many people are talking, hear my story too: MJ Akbar has been one of the best bosses I have worked with. Learnt everything I know about newspapers from him. A tough taskmaster and a thorough professional. Never felt uncomfortable. NEVER,” she had tweeted on October 29.