‘Cheteshwar Pujara is the wall (of Indian cricket) after Rahul Dravid. He is the Indian wall like the China Wall (referring to the Great Wall of China).’ 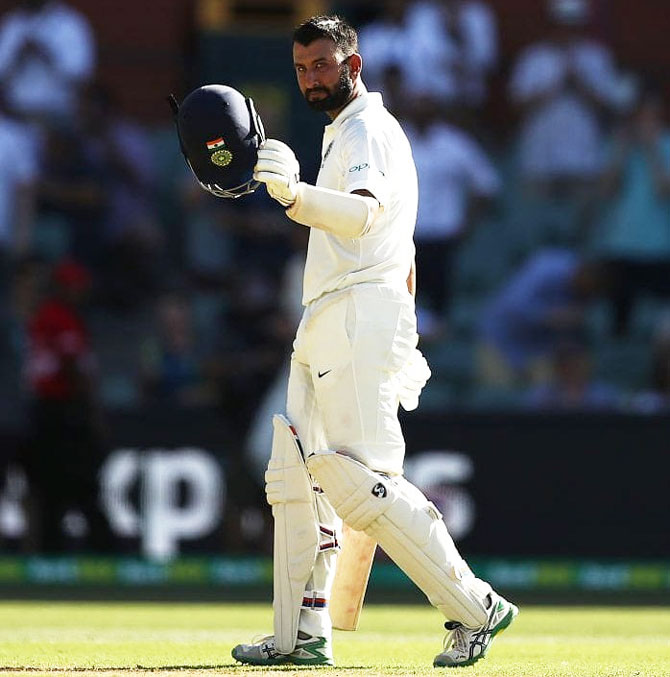 IMAGE: Cheteshwar Pujara scored a century and a half-century in the first Test in Adelaide in his man-of-the-match effort. Photograph: BCCI/Twitter

Former Test pacer Karsan Ghavri expects beaten Australia to fight back in the remainder of the four-match rubber starting with the second Test at Perth, but backed the Virat Kohli-led India to hold fort.

He also hailed Cheteshwar Pujara, who pulled the chestnuts out of the fire with a battling century in the Indian first innings of the opening Test at Adelaide and followed it up with another half century to help the visitors consolidate, as the “Indian Wall”.

“We are up 1-0 in Australia right now and there are three more Tests to go. But I will not be surprised (if) there will be a big fight on the field from the Australian team. They (Australia) will fight back. But I can tell you we (India) have an upper hand. We have an advantage of being a great team,” the former left-arm pacer told PTI on Tuesday.

India gave wings to their quest for a maiden series win in Australia with a 31-run victory in the opening Test in Adelaide, their first in the country since 2008 on Monday.

On the contribution of Pujara, declared the man-of-the match at Adelaide, Ghavri said, “Cheteshwar Pujara is the wall (of Indian cricket) after Rahul Dravid. He is the Indian wall like the China Wall (referring to the Great Wall of China).

For Indian cricket, in Tests, Cheteshwar Pujara is the wall of India.”

“His (Pujara’s) wicket is a very prized wicket one in Test cricket. Like when Rahul Dravid used to play, his wicket was a prized wicket (for the opposition). Today Indian cricket can depend on him (Pujara) and as long as he delivers the goods, it’s great for Indian cricket,” said the 67-year-old Ghavri who also hails from Saurashtra like Pujara.

Ghavri, who switched over to Mumbai from Saurashtra early in his career, had also helped Pujara during the latter’s fledging days.

“Personally I feel we have won this Test in Australia in Adelaide because of Pujara, his great performance. He gave Indian bowlers (something) to bowl at as you require runs on the board. His contribution was sizable,” said Ghavri, who was the senior in his new ball partnership with the legendary Kapil Dev.

Ghavri, who played 39 Tests, also felt the Australian team was missing the banned  duo of Steve Smith and David Warner.

“I am sure they (Australia) are missing Steve Smith and David Warner, as they were the main run-getters for Australia in the last couple of years,” the former speedster remarked.