Its elections time again. The center of attraction being the state of Chhattisgarh.
It has been a 15-year rule of Raman Singh-led Bharatiya Janata Party (BJP) government in the state. The Chhattisgarh Assembly has 90 seats, and 18 seats in Bastar, where Left Wing extremists have influence. The last two elections have been won or lost by a difference in vote share between the top two major parties by one percentage point or less. 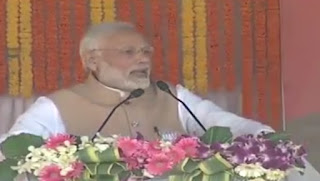 The 2018 polls see a new drawing board, new alliances and new equations. All of us including the PM, the CM and the rest of the leaders and voters have grown 15 years older. Its a three-cornered contest, with Ajit Jogi-led Janata Congress Chhattisgarh, Bahujan Samaj Party and Communist Party of India alliance also in the fray.
The BJP is looking at continuing its winning spree, while its opponents want to end it. Invariably, the major contestants trade allegations against each other led by their top leaders.
Both the Prime Minister Narendra Modi, who has a busy international itinerary next week, and the Congress President Rahul Gandhi hit the campaign trail on Friday in poll-bound Chhattisgarh’s Bastar region.
Also read : Rahul Gandhi accuses BJP
At a rally in Kanker, the Congress president Rahul Gandhi said: 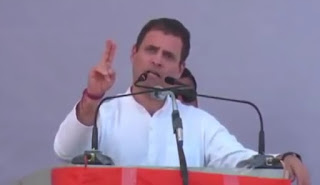 – the PM has forgotten the promises he made to the people in 2014 of creating 20 million jobs a year, crack down on black money, depositing Rs 1.5 million in bank accounts of all Indians, and waiver of farm loans.
– Congress government will reopen 3,000 schools in tribal areas shut down by the Raman Singh government, and fill the 60,000+ vacancies in teaching posts.
– Congress government would announce a farm loan waiver within 10-days of forming a government, and has written off farm loans in Punjab and Karnataka. If Modi can write off Rs 3.5 trillion worth of loans of 15 richest Indians, why is that he cannot waive off farm loans.
– Modi has now taken to talk about Maoism to hide his government’s failures to deliver on those promises because chowkidar chor hai.
– about the Rafale “scam”: The Modi government is busy constructing two India’s, one that belongs to the rich and other for the poor
– the chief minister’s son finds a mention in the ‘Panama papers’, while bringing up the so called chit fund scam of the Raman Singh government.
Addressing a rally in Jagdalpur, the PM said: 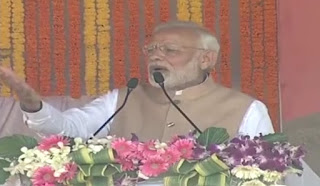 – BJP’s mantra was development, while that of Congress party’s was to lie incessantly.
– has resolved to make Atal Bihari Vajpayee’s vision for Chhattisgarh a reality
– Congress supported “urban Maoists”, who travel in air-conditioned cars and their children study abroad but they get children of Bastar to wield guns instead of reading books.
– Congress leaders born in palaces with silver spoons in their mouth cannot understand the problems faces by tribals
– Congress leaders were apologists for Maoists. (Alluding to a recent statement by Congress leader Raj Babbar where he had described naxalites as revolutionaries)
Also read : BJP poll manifesto released
The PM did not respond to any of the Congress’s allegations on the Rafale fighter jet deal, but said Congress was adept at lying. He said, “The Vajpayee government had bifurcated Madhya Pradesh to create Chhattisgarh. 9,000 villages of Chhattisgarh have been linked with roads during the tenure of his government and a medical college and hospital was built in the state.”
Analysts, however, predict that the Congress poll promise of loan waiver will be the deciding factor. If Modi can let go Rs 3.5 trillion worth of loans to a few richest Indians, why is that he cannot waive off farm loans? To this, the BJP has neither any answer nor an attractive alternative yet which can win it votes. Even the BJP election manifesto is silent on this.

Spend Less On Your Vacation With The Best Airfare Deals